Proposal photography strikes me as something very specialized. Really, it is. It is special for that couple. Capturing that moment for them is special and is such an incredible honor that there is no possible way I could have said no to my friend when he asked if I could do it for him.

First, I was excited for him! He was going to propose to his girlfriend of four years when she arrived from Toronto. They had been in a long distance relationship for a little while and she was coming to visit.

Second, I was excited for myself! To explore this new subsect of photography that I hadn’t even considered!

The details…I had to know his details so I could be adequately prepared. She would be arriving late in the evening, around 10:30PM from Toronto. He planned to be there, in the airport, dressed in his finest, at the bottom of the escalator with flowers and a sweater that said “Girlfriend” crossed out with “Fiancee” below it. And the ring, naturally.

Uhm…may I offer some suggestions?

Thankfully, my friend was open to my input on the manner by which his proposal was executed.

Principal suggestion: Don’t do it at the bottom of the escalator. There will be A LOT of other people coming off that flight, and if he wanted me to be inconspicuous, I anticipated having an issue seeing through the crowd of people to capture the special moment when he got down on one knee.

We decided to arrive at the airport early enough to scout out and plan a better place. We arrived at the airport around 9:30PM. It was around Christmas time so we couldn’t help noticing the beautiful Christmas tree displays that the YXE Airport had set up around the building.

We evaluated the baggage pickup area to see if that was usable, but there was a ghastly green light from the fluorescents overhead (easily managed, really), but it also just wasn’t pretty. We ventured away from the baggage check, towards the beautiful Christmas tree displays. By far, the nicest one – and the one we chose to utilize – was by the pre-boarding screening area. It was all white and cream colored with paper flowers affixed to the wall, a white fur covered seat, and a beautiful white tree with luggage and Christmas ornaments.

While setting up my single flash and trying to keep it out of direct visualization, testing the brightness of the scene, my friend and I discussed how to lure his lady over to the display. What sort of a convincing lie could he deliver to lure her over there without suspicion?

Thankfully, we didn’t have to think of much. The screening officers saw what we were doing and, curious, came over to inquire. We filled them in on what was happening and they leaped to help in any way they could (it wasn’t that busy at that time of night for pre-board screening).

A) The screening officers and other security members keep tabs on the flight and alert us when it touches down.

B) A security officer makes his way to baggage claim.
They knew what my friends lady looked like from a picture she had sent him prior to boarding (and yes she looked stunning. And he assured me she would continue to look stunning in spite of a long flight). There, he addresses her by name and asks her to come with him (freaking her out and causing her mind to race about what she had done wrong).

C) My friend is waiting around the corner from the display. I’m waiting nearby with my cameras hidden under my jacket.

D) When she and the security officer come in to view, my friend steps out from around the corner, one of the screening officers plays her favorite song from his phone and my friend points out that there’s a present for her under the Christmas tree.

E) Placed beneath the tree is the wrapped sweater. He encourages her to open it.

F) Once she realizes what the shirt says, he gets down on one knee and pulls out the ring delivering a speech from the heart and soul. 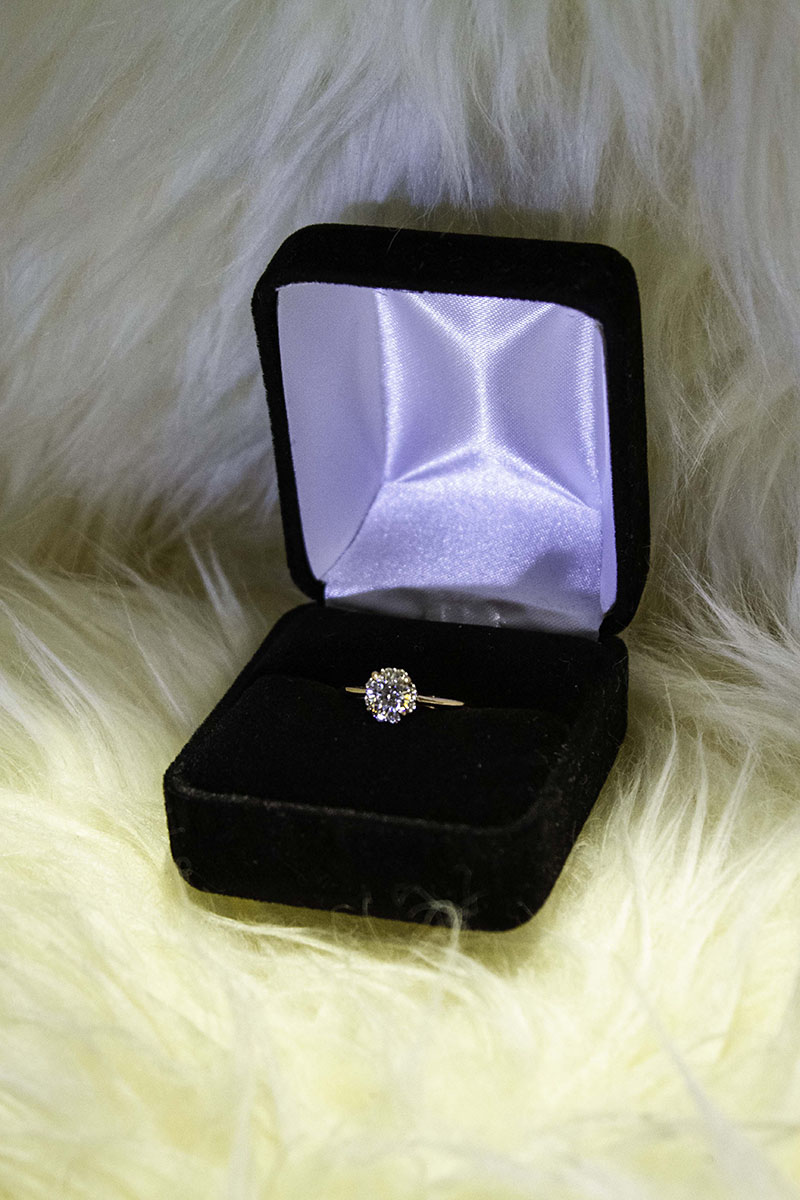 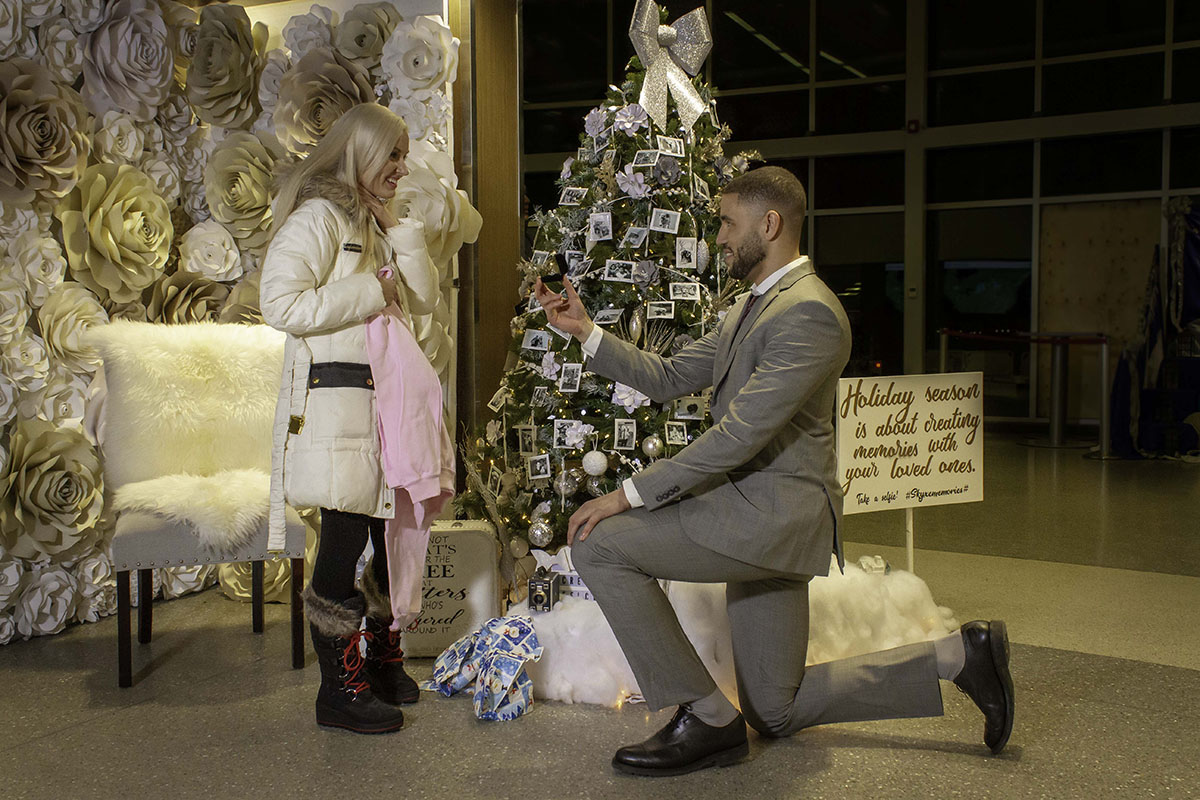 The plan went off without a hitch.

As soon as she came in to view and he stepped out, I leaped up and started taking photos and she barely noticed the flash going off. I captured her concentration as she held up the sweater and read it and then the moment when she realized what was happening. Her surprise when he got down on one knee and opened the ring box, trying to contain his own tears.

The moment she said, “Yes.” The hugs and kisses that followed.

The newly engaged couple did a photo with all the Screening and Security officers who had contributed.

Then I gave them a mini-engagement session utilizing some of the nicer areas of the airport for 15 to 20 minutes. It was late, afterall, but we couldn’t defer this joy to another day. It wouldn’t be nearly so fresh.

We went outside where the snow had started to fall gently and popped a bottle of champagne to toast their new engagement.

It was such a beautiful moment. I was and still am so honored to have been invited to be involved with it.

I look forward to capturing other couples special moments. 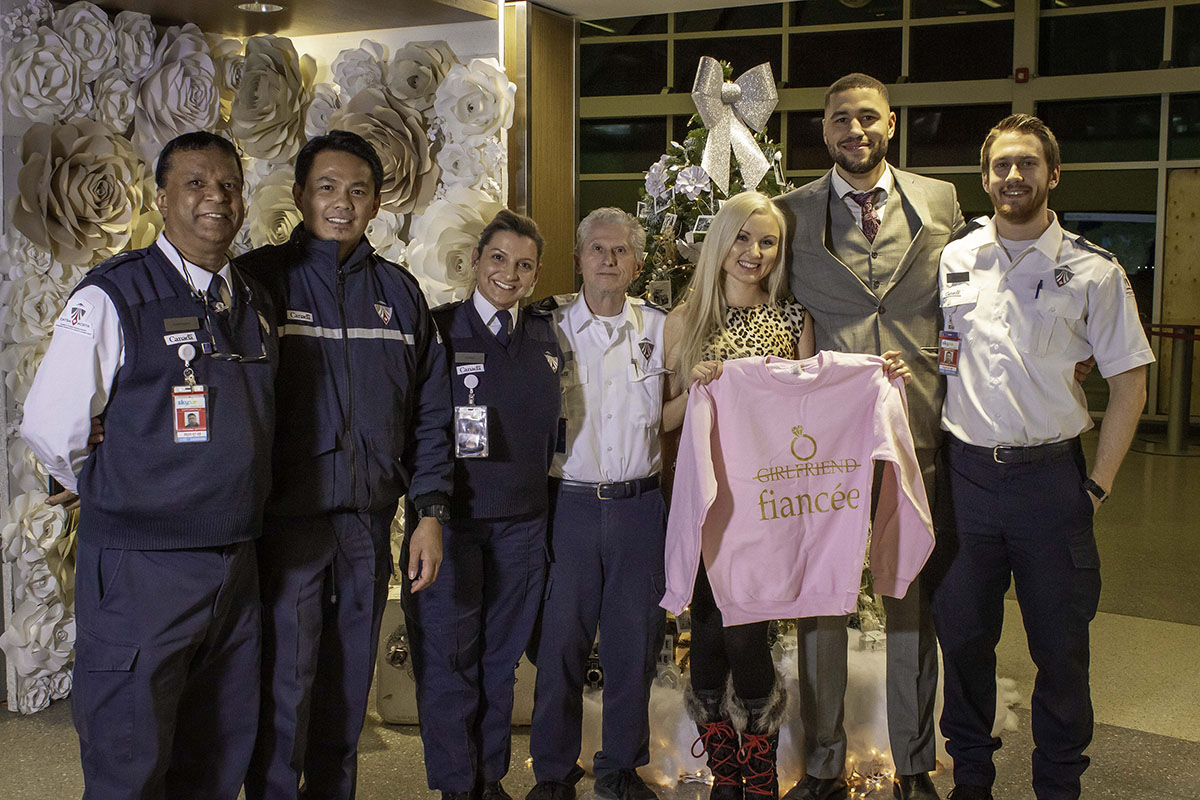 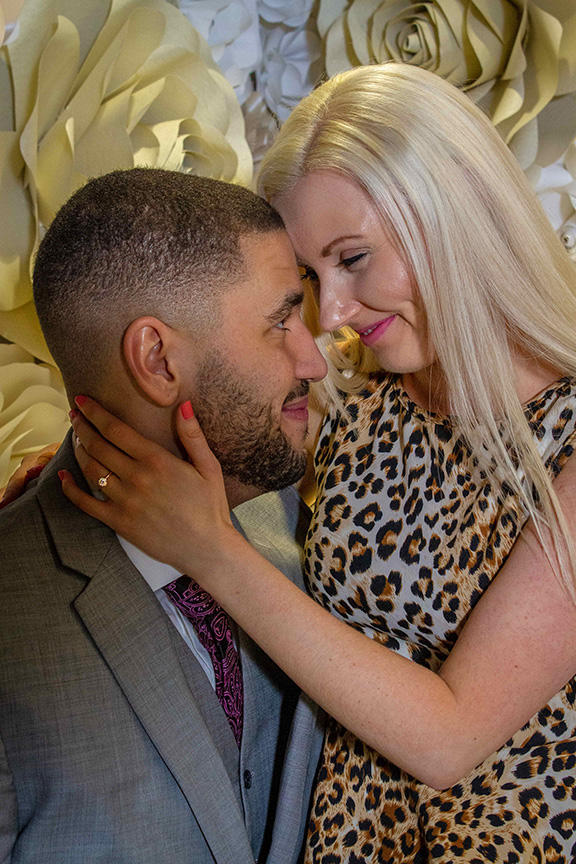