How I found My Way In To Roller Derby Photography

How I Found Roller Derby…At First

November 2015 I had a friend who, essentially, looked me up and down and said that I would probably enjoy roller derby. I’d only ever seen roller derby in the movie ‘Whip It’ so I didn’t know it was an actual thing that happened outside of the United States. It didn’t take me long to figure out that there was a flat track roller derby league in Saskatoon.

I went to watch the 2015 Season Closer. I sat in the stands among the fans, loving their energy, watching the strong men and women (co-ed game) as they flew around the track. I felt excited. I wondered, “Why am I not doing this already?!” I kept track of the Saskatoon Roller Derby League Schedule, waiting for Fresh Meat Intake for the 2016 season.

I committed a no-no before Intake even happened. I was all out convinced I was going to love roller derby. There was no chance in my mind that I was going to hate it. I had already chosen my name. So on Boxing Day, I purchased my Fresh Meat Skater Package from Rollergirl. The reason that’s a no-no is that everything you’ll read recommends waiting until you’ve tried it out a few times before buying your skates as it can be an up to $500 investment to find out you don’t like it.

And it wasn’t. When Fresh Meat Intake happened in April, I was all in. I was there for both days of Fresh Meat Intake on my skates. There is no try-outs, they’ll accept anyone willing and then put you through 3 months of training where you’ll learn to skate safely, fall safely, and do basic skills needed to play safely.

I went to every single practice I could make it to and I thrived. I loved skating! I loved the feeling of the air whipping through my hair as I gained speed going around the track (although I imagine I was much slower than I thought I was since I still couldn’t cross-over properly lol).

I went skating outside with one of my besties on June 4, 2016. It was a 10km trail skate which felt great. I was excited. It was around the time of the Children’s Festival and our trail went by the festival.

We were on our way back to our vehicles to go and celebrate her birthday with cheescake. We had to go down a small hill with an uncertain landing covered in pebbles (potential for a bad fall), a curb to step off of, and people all over the sidewalk. I still wasn’t a pro at Plow stopping but I knew if I took the hill slow and plow stopped the whole way down I could be fine.

It didn’t work out that way. I don’t remember this clearly – my friend does – but apparently a child darted out in front of me and I tried to stop, but couldn’t. So rather than hitting the child, I threw my weight back and fell backwards…on to my leg.

And the pain was seering. It was awful. I saw red and I cried out. I didn’t know at that moment that it was broken. I thought and hoped that maybe I’d simply sprained it. I hoped that with a few moments of time, it would improve…like when you accidentally stub your toe. After a short while, the pain subsides.

I crawled off the pathway, not daring to put weight on the affected limb. I pulled the skate off and elevated the foot as it was too sore to rest on the ground. The pain didn’t stop. Not wanting to call an ambulance when the hospital was literally across the bridge, my friend went to get her car and came back for me.

Xrays confirmed that the leg was broken. My fresh meat journey was over for now. I did continue to attend the fresh meat practices to be supportive, to DJ when they needed it for the five minute skate, and to try to absorb the skills by osmosis for when I came back the next year. 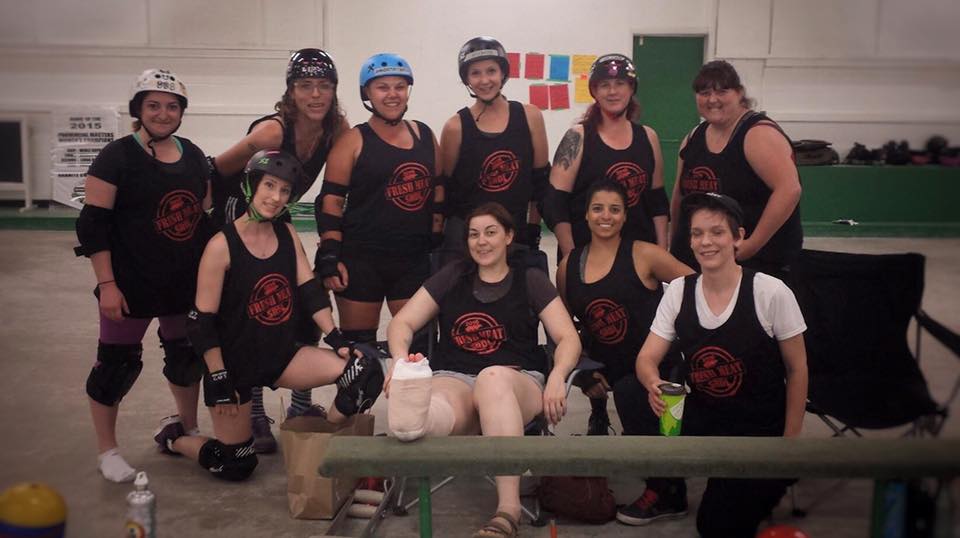 One freak leg break on roller skates wasn’t going to stop me. I got my skates back on as soon as I could – only two months after being cleared to walk cast-free. I had falls, but I kept getting up. I used the recreational roller derby league as a means to start rebuilding skills I used to have.

And I counted down the days until Fresh Meat started again in 2017.

I’m not going to lie. I had a few fears to get over when Fresh Meat finally did start. I was ahead of a lot of the ladies who attended, but I was behind in some things, too. Simply because I was a bit afraid to fall. To hurt myself again.

I had to learn how to fall safely again, which I did. Then I was able to excel.

I made it through Fresh Meat. I made it to benchmarking. I was struggling with 23 laps in 5 minutes, when I needed to make 25 at minimum. I achieved the extra 2 laps after purchasing myself a new set of skates with new wheels and bearings.

It shouldn’t be so surprising that new and clean bearings can reduce how much effort it requires to skate the 27/5.

I made it! I was going to be playing home games! The next goal was to make the 27/5 and become a Killa Bee. 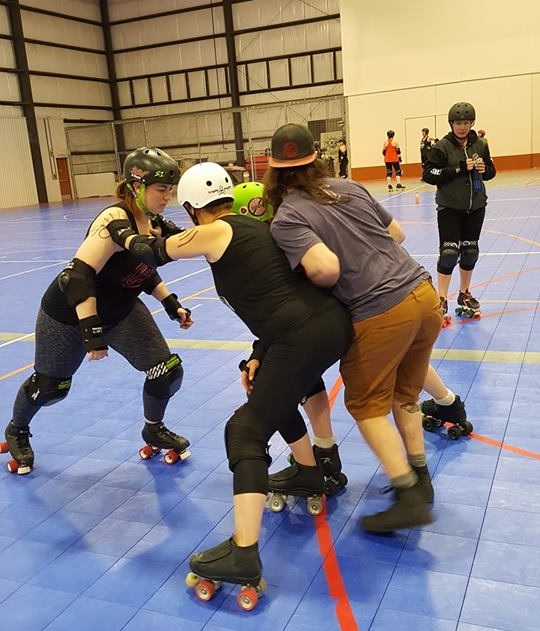 The Freshies, who were now being called Rookies, initially tried to stick together, but the Senior skaters wouldn’t have it. They separated us and encouraged us to integrate with the senior skaters and to push ourselves so we could learn and improve. We wouldn’t improve as fast if we didn’t. 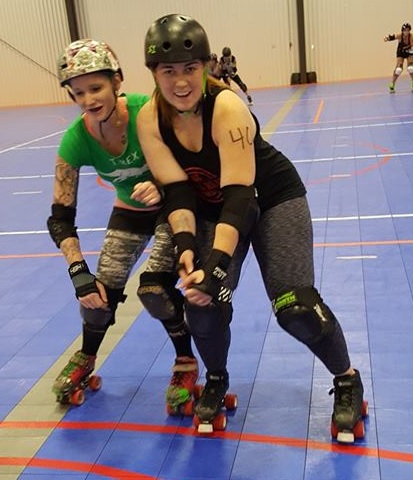 I played games. I learned. I struggled. I learned some more. I chastised myself. I built myself up. And I got better.

Shortly after returning in February 2018, we repeated benchmarking. That meant repeating the 27/5 attempt. We had had a few practice runs, but this was legit. 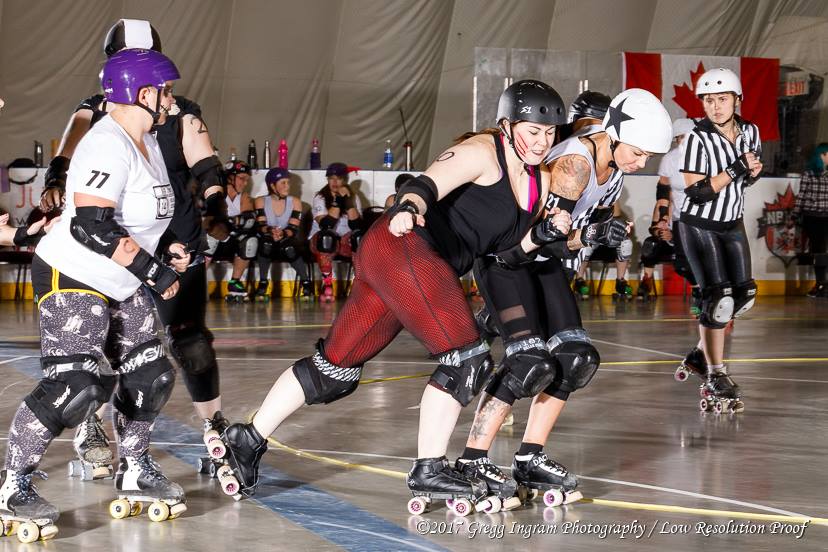 I got in to my mental space and I pushed through, as fast and as hard as I could, picking a senior skater on the track to try to keep up with. Ignoring the burning feeling in my throat.

I trained and prepared, and played my first game as a Killa Bee in April 2018. It was bad (lol). I had a few shining moments, but more moments where I tore myself to pieces over how awful I was doing. Looking back on the footage made me want to cry.

It didn’t matter. I would learn, I would improve and I would do better.

April 20 my Grandfather, who had been sick and in hospital for a short while, passed away. I grieved. I went to work on my regularly scheduled night shifts so I wouldn’t sit at home and dwell.

April 24, I had just come off a night shift. I was still grieving, so I didn’t sleep very well, but I knew I didn’t want to be at home. I considered not going to practice, but wanted to be out doing something that could keep my mind off of my grief.

So I went. It was good. Then I started to overthink a drill, and I fell…on my other leg. This time I felt the break. I cried and hoped it wasn’t broken. It was definitely broken. Confirmed on Xray. I had another repairative surgery.

My Roller Derby journey was put on hold, yet again.

This second recovery was much easier than the first. I was able to drive an automatic vehicle, so I wasn’t trapped indoors as I had been the last time. I also had lots of visitors who brought me gifts, and hung out with me to chat.

Shortly before I’d broken my leg, I had started my own photography business on the side (based on the suggestion from my soul sister that I should photograph her sis-in-laws wedding). One of my visitors – in response to me saying I wasn’t sure if I was going to come back to roller derby – casually suggested that I should use my photography skills to start photographing roller derby.

At that time, I blew it off.

I considered repeatedly if I could go back to roller derby. I had broken both legs on roller skates. The last time had been financially difficult. I didn’t think I could risk another injury by continuing the sport, though I did love it so.

It broke my heart to choose it.

I chose to remain off skate, but I didn’t want to be one with the league. I was encouraged to try my hand at being a ref for the league, but I honestly didn’t think I could ever remember the rules well enough to be able to call out a penalty with confidence. And ref’s are still at risk of injuries from flying skaters and falling.

I could stay in the league as a non-skating official. That was definitely a safer way of staying involved.

The seed had been planted.

Roller derby photography. Could I? I wouldn’t know unless I tried, I guess.

I started toting my cameras to the practices. No one chased me away. I took hundreds of photos for a few practices over a month or so. The league members seemed to like them. I was bolstered by their positive feedback and continued to come around every so often with my cameras and eventually carrying my cameras along to a game day.

It wasn’t much longer before they offered to start paying me to carry my cameras to games.

And that was it. I was a roller derby photographer from then on.