I have finally accomplished what I set out to do last year (a story for another blog post). I became the Saskatoon Roller Derby Leagues photographer of choice for home games for the 2019 season (and hopefully for the forseeable future). I made my way in to Sports Photography. I was there.

In the past, I had just shown up to games with my cameras and took pictures even though they had a paid photographer there. This was wholly acceptable because I knew everyone in the league (again, another story for another post). All I had were my own basic lenses which didn’t afford a lot of good light and provided grainy photos that required a lot of noise reduction during editing.

So, my personal assessment of these photos was that the content was good (everyone loved my photos) but the sharpness and clarity were far from desirable.

A few years ago, the league had a photographer at one of their home games who used flash photography. The photos were amazing! They were excellent! And so dramatic! But they came with other forms of drama. Someone on the track or in the audience had a seizure secondary to the flashes. So after that, flash photography had been sort of frowned upon and the league, out of concern for their fans and players, decided to evaluate the use of flashes on a case by case basis.

Since I knew my limitations as far as lenses, and I knew the lighting of the venues was never as good as our eyes perceived it to be, I chose to send a letter to the SRDL Board of Directors to beseech them to allow me to attempt flash photography again. I promised that I would: a) keep the power of the flashes as low as possible – flashes have several different power settings that provide varying amounts of light, b) try to keep them above eye level, and c) if anyone had a reaction I would cease using them immediately.

My request was approved!

I purchased an extra flash and new flash triggers and receivers (because the brand I already had was too expensive to buy more of) and happily brought it all with me to the Saskatoon Roller Derby League Season Opener on March 16, 2019 at the Saskatoon Soccer Center on Nelson Road.

My plan had been to set up four flashes. One on each corner of the track. That seemed like it would be the best way to ensure the best lighting coverage of most of the track. Unfortunately, I only had three light stands. I also had a tripod but it definitely wasn’t tall enough to be above eye level.

My plan for four flashes was foisted by a lack of a light stand. I could make do with three, though, and would keep the fourth as a backup if one should go down.

I set up two flashes on corner one and two because those were my favorite spots to take photos, and the third on the outside apex between corner three and four. My light stands weren’t all the same height – two that were 7 feet tall and one that could go to 9 feet tall.

I spent the hour and a half before the first game nervously testing my flashes to find the correct power setting for the clearest photos, asking one of my friends to skate casually around the track so I could test them on her.

When I thought I had it spot on, I sat down and relaxed. Then the head ref came over to me and expressed concern about the brightness of the flashes. They had been watching and thought the flashes might be too bright. I was nervous all over again. They weren’t going to make me take them down, though. We would see how it went and if they were too much then they would talk to me again.

I started thinking of ways to change things to prevent losing the flashes. I wanted to do my best for the league and I wasn’t confident I could do it without the flashes. I could certainly do the job but it wouldn’t be as good as it could be. I raised the light stands as high as they could go, I tilted the flash heads up and popped the reflector cards out and I decreased the power just a bit.

I think the ref crew saw this and also did their best to tolerate the lights.

When the game started, I found my best vantage points for taking advantage of the flashes was outside the track, and to avoid capturing the flashes in the photos. Some photos with the flashes in the background turned out excellently, but just as many didn’t because of it.

The presence of the extra lighting from the flashes provided some really fantastic photos when the players were closest to where they were placed, but not as good when the light fell away during the straighaway stretch heading toward corner three (where I only had one flash set up).

Then I noticed that one of my corner flashes wasn’t flashing. I kept capturing photos as I made my way to that flash. I turned it on and off, I turned my triggers on and off. Trouble shooting while still taking photos. I appeared that the batteries were low and/or dead. So, between jams I pulled the flash away from its location and moved the other flash to the apex in order to get SOME light while I made my way to replace the one that had gone down. With the downed flash replaced, I had light again.

As the night went on, the other flashes started dying until, by the end of the second half of the second game, I had no flashes. I had to make due with the light the venue provided.

Thankfully, a few days before this I had finally purchased my coveted Canon 70-200mm f2.8 lens specifically for sports photography. So I was saved by that, but disappointed in my lack of preparedness.

So, what I learned from this experience was a) ALWAYS have spare batteries, b) ensure you have all the equipment you need to execute your plan and c) that it is all in good working order, and d) Roller Derby is always awesome to watch, whether behind the camera or not. 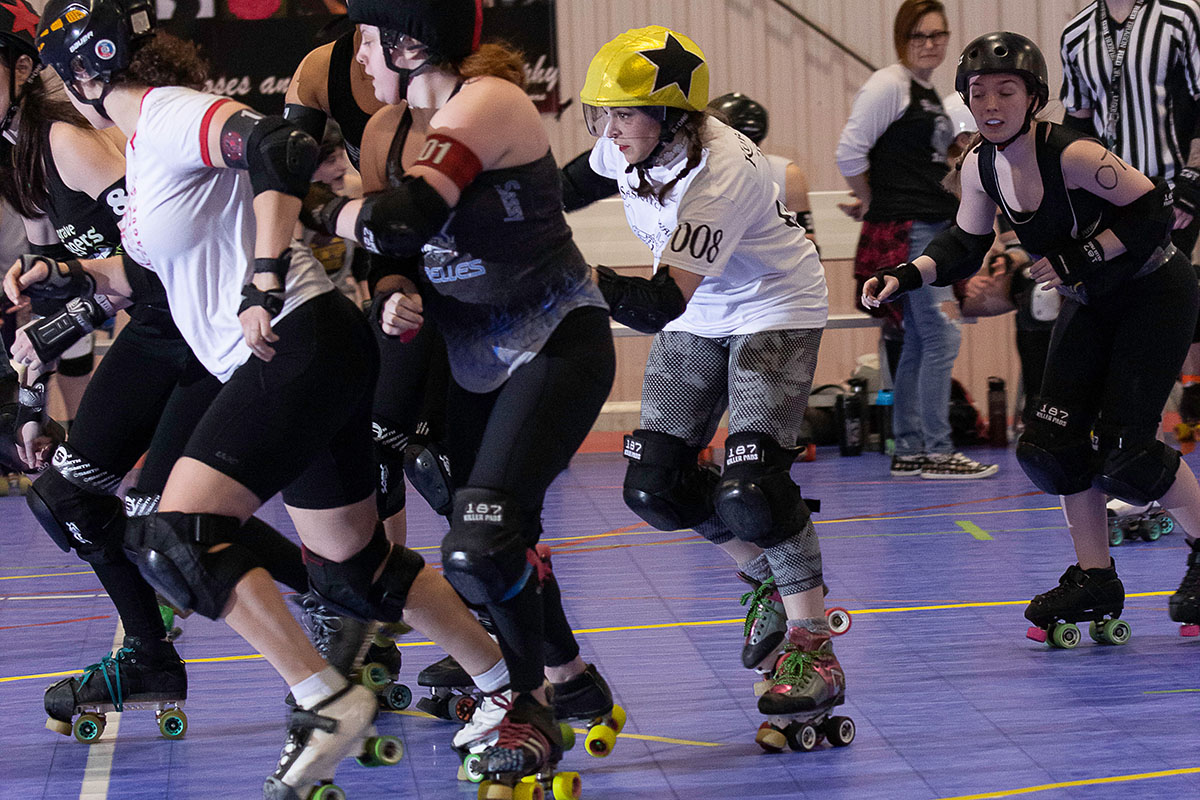 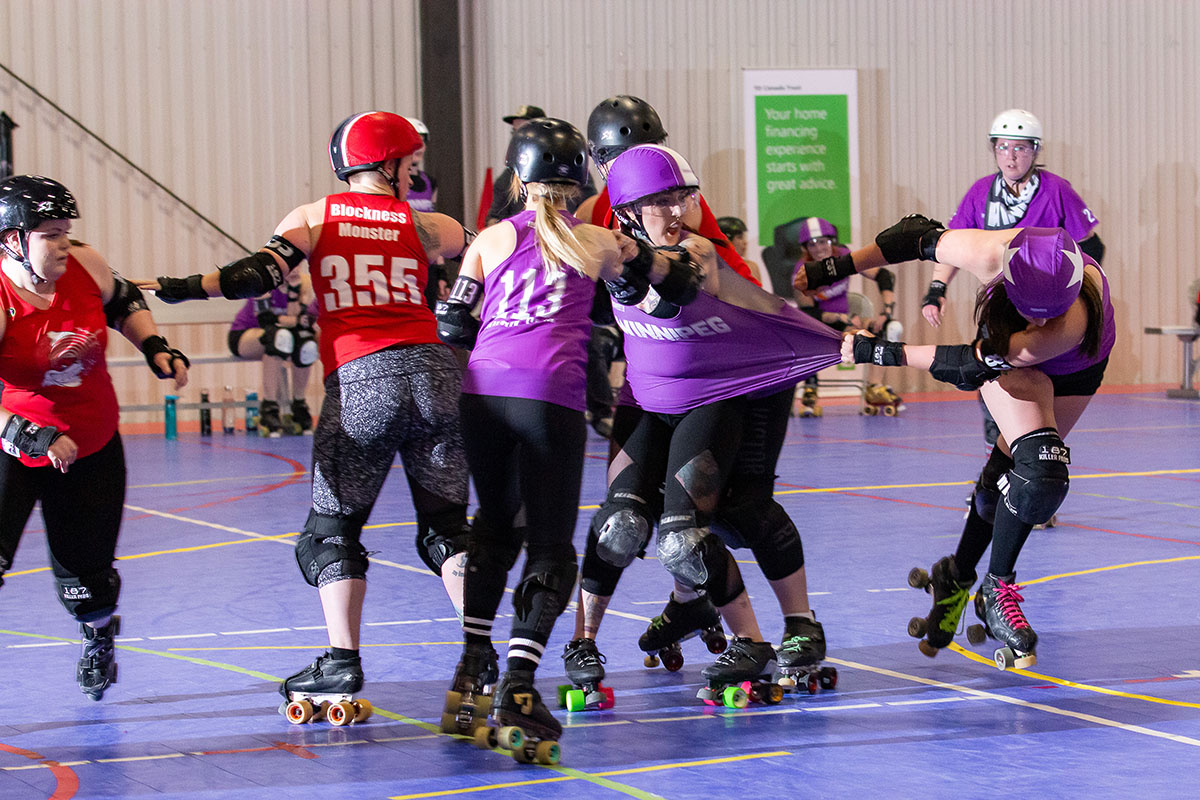 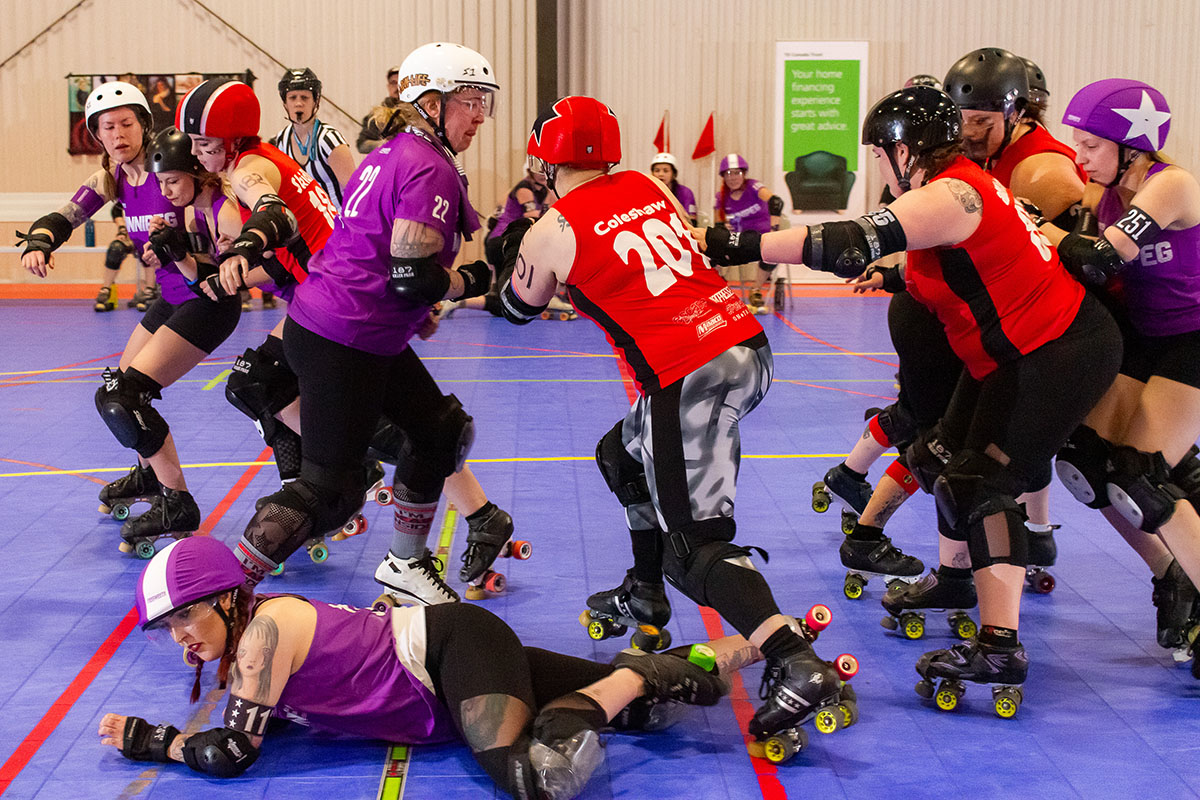