It’s tough all around, right now. So let’s focus on how people spread joy right now.

We are all making the necessary sacrifices in order to flatten the curve here in Saskatchewan. It’s proving successful, though! We are rocking it!

But…it is taking it’s toll on our mental health. The adults cooped up with their spouses and children are going stir crazy, drinking whole bottles of wine every night while watching Tiger King (is that just me? Just kidding, I don’t do that…not every night lol). The children are getting cranky and bored. Couples are learning things about each other that they may not have learned until years down the road. There are people all by themselves who are, perhaps, falling in to a situational depression.

It’s bringing the worst out in some people. Shady people are still being shady. There are plenty of people trying to take advantage of the situation and the people affected by the situation. I mean, hoarding toilet paper so you can sell it at a premium is pretty damn shady (law enforcement put a stop to that right quick, thankfully).

Even though there is a lot of negativity going around, I would like to remind you that there are a lot of things to be positive about. We are doing it! We are flattening the curve and we are keeping the strain off the healthcare system (thank you!). We fucking rock, Saskatchewan! If you’re doing it in your area (anywhere in the world) then you rock, too! And you know what, even if your area hasn’t contained it yet, but you’re doing your part by staying home, you fucking rock, too!

This blog is about some of the things that people in Canada, mostly Saskatchewan, are doing to help spread positivity to others in their communities! Things we have done to help ease some of the mental burden of the sacrifice being made. Things that have restored our faith in the goodness and wonder of humanity!

Let’s talk about singing. In Italy, to be clear. Since going in to lockdown, Italians have done their best to keep their spirits up. In fact, there were a few events where people in apartment complexes came out on their balconies with their instruments and their voices and started to make beautiful music together! And this was something that helped keep their spirits lifted and feeling positive.

I know! I said this blog featured Canada – mostly Saskatchewan – and I didn’t lie! This particular event in Italy inspired my stepdaughter and myself to do the same in our neighborhood. 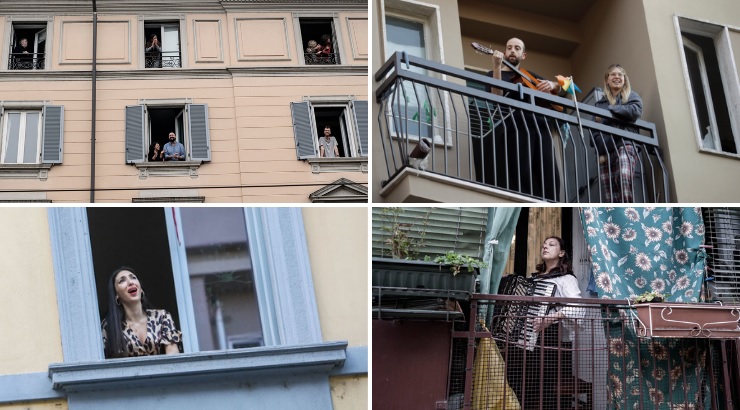 This came about one warm night while my she and I were sitting on the deck, listening to music on our phones. We simply started belting out the lyrics (not poorly, might I add). We serenaded the neighborhood to ‘Into The Unknown’ from Frozen 2. It’s one of those songs that almost everyone knows and has so many opportunities for engagement from other people. And that’s what wanted. Engagement.

So for the next two nights, we went out and sang ‘Into The Unknown’ at the tops of our lungs to the neighborhood. We did this for three nights. Overall, we did not receive the engagement we hoped for. We stopped after the third night because it looked like our neighbor was becoming annoyed by it. He closed his windows and blinds when he saw us outside (lol). BUT we must have spread some positivity because the second night, someone far out in the neighborhood cheered. Small wins.

Next on our journey of positivity is Little Glimpse of Joy Project. You can find them on Instagram @little_glimpse_of_joy.

The ladies who made this group put it together in order to spread joy during this challenging time! Which is why they are part of this blog!

These ladies are spreading joy by delivering bath bomb kits to homes to provide an activity for individuals and families to do while in lockdown. 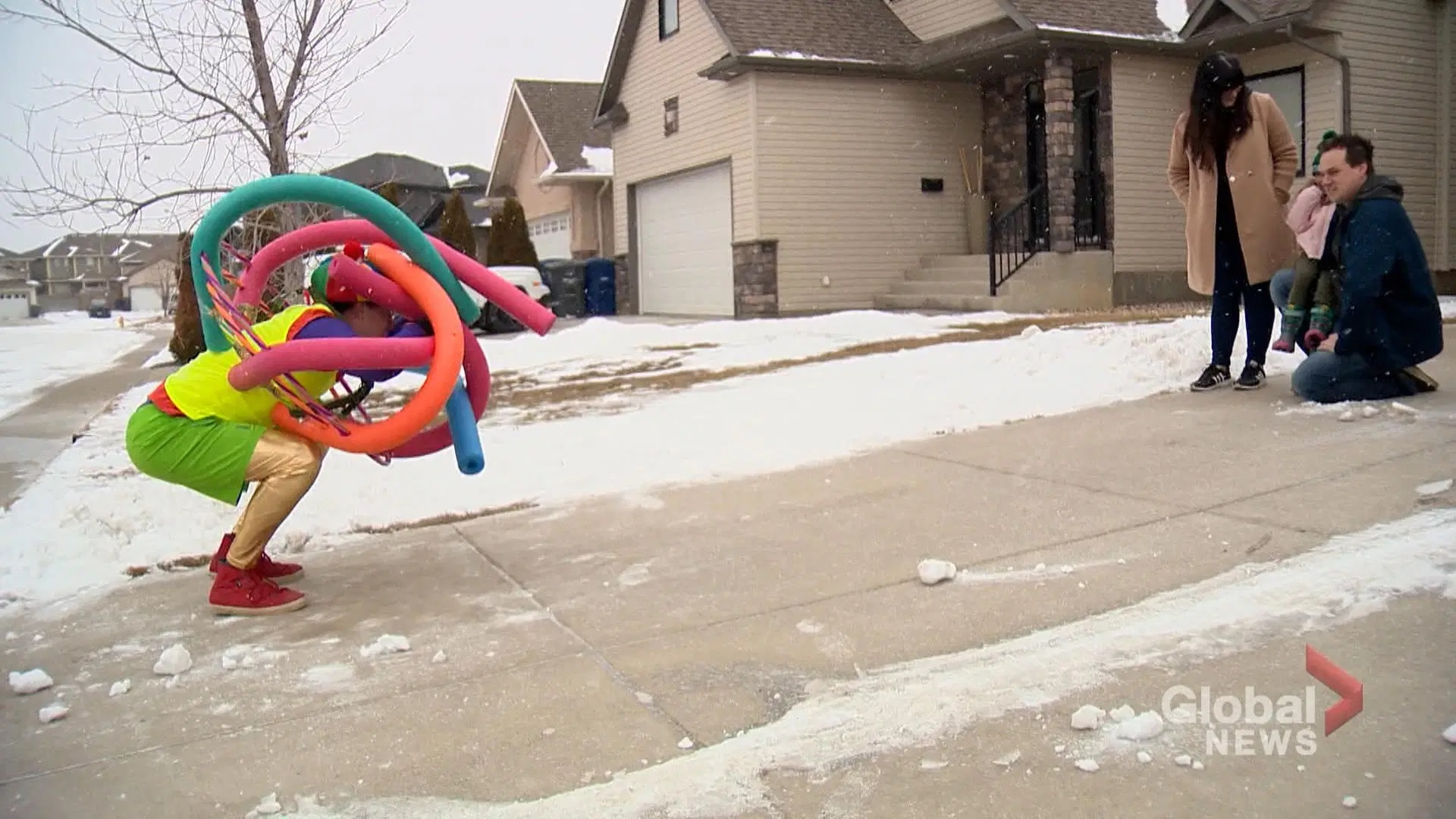 Brett Williams entertaining a family at the end of their driveway

Let’s talk about Brett Williams! Global is only one of the news outlets that has already featured him but I love what he’s done so I’m going to mention him again!

You see that funny outfit he’s wearing in the photo? He reported to Global News that the outfit was initially meant to teach children what 2 meters looked like (and it does) but it and his antics have evolved in to a method of entertainment for kids in Saskatoon and the surrounding area.

He’s provided 10 minutes of entertainment at countless homes, standing outside windows and at ends of driveways in Saskatoon and surrounding area. And all he asked for in return? “Pay it forward.”

And, of course, we absolutely cannot forget the photographers. I mean, I am a photographer, so I definitely will NOT forget the photographers in the area (including myself) trying to spread some good feelings during lockdown. I’ve done a few Front Steps Project photos for people in my circle, and I’ve already written and shared a blog about doing webcam boudoir sessions free of charge or in exchange for a donation to an organization who needs it. So I don’t need to toot my own horn again.

There are lots of photographers doing their best to provide some light in these greyish times, but the one who keeps coming across my newsfeed is Purple Stone Photography.

Kelsey from Purple Stone Photography has done so many Front Steps Project photos that she has content for months to come if she only wanted to post Front Steps photos lol. She does these sessions on a ‘Pay What You Can’ platform. But mostly she wants donations to the Saskatoon Food Bank! Not only is she providing positivity to the families she’s shooting, but she’s providing support for an organization that puts foods in the bellies of those are struggling financially (amplified by being out of work)!

Way to go, Kelsey! (And all the other photographers that are doing the same!) 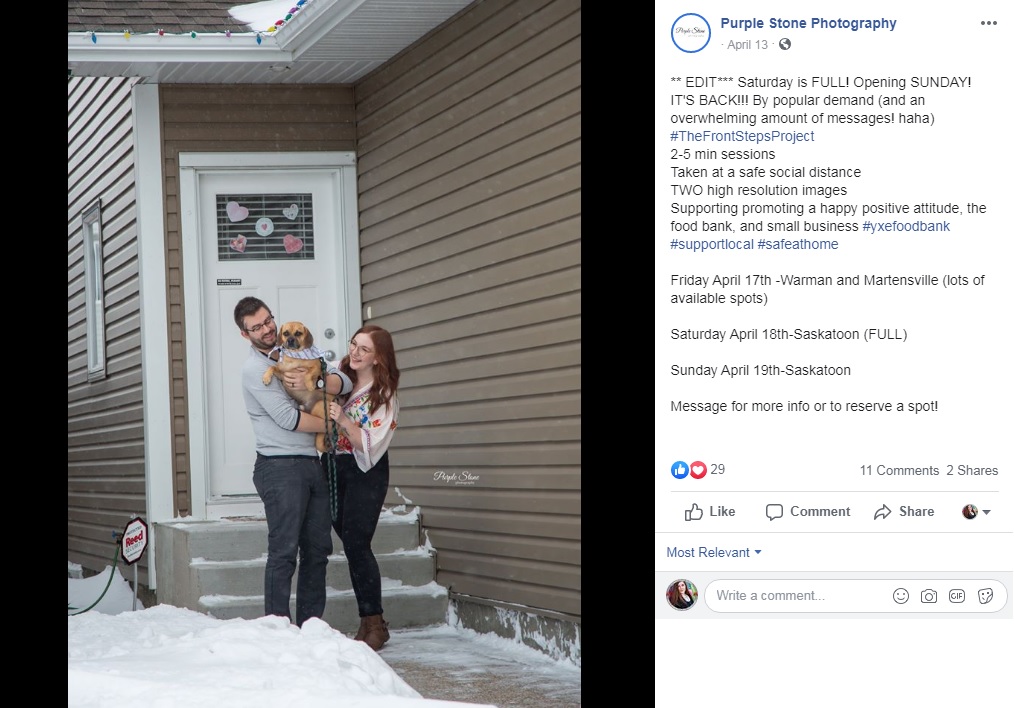 **There has been some controversy about the Front Steps Project flying around social media here in Saskatchewan. For a short time, it was said that the Saskatchewan Government had strictly forbidden any photographer to do any kind of shooting, from any distance. It didn’t matter if it was 6 feet or 100 feet, they didn’t want photographers providing photography services. That was brief lived, though, as a photographer reached out to Saskatoons Mayor and cleared that up as a miscommunication. Photographers are still allowed to work as long as they are doing it safely and maintaining social distancing. Alas, the controversy in the photography community persists.** 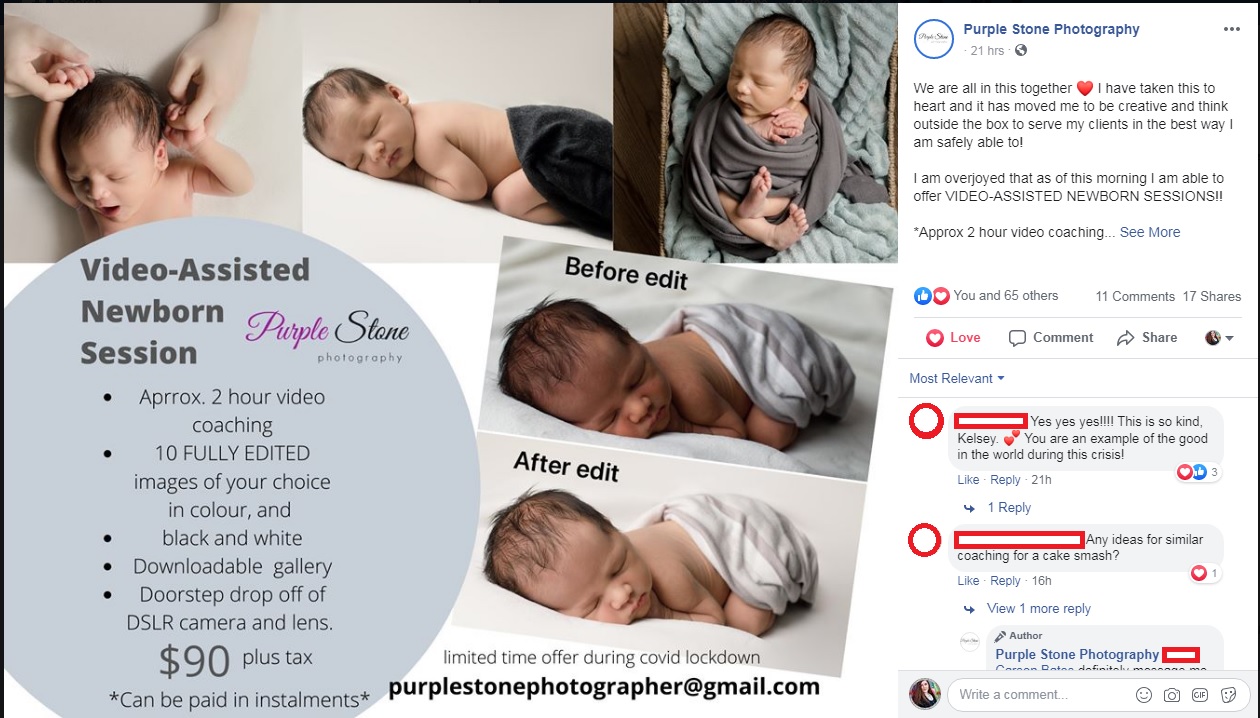 That isn’t all Kelsey is doing, though!

There has been some incredible innovation and adaptability happening in the photography community that has me applauding everyone. Finding ways to still safely provide services…y’all are so damn smart.

Purple Stone Photography also provides Newborn Photography and had a whole slew of clients lined up. Then lockdown happened…babies don’t just stop being born because of lockdown. And when her first lockdown baby was born, she struggled with knowing she wouldn’t be able to provide those images for her client.

But she found a way around it.

She decided to guide her clients through getting the images. She cleaned and sanitized one of her backup cameras, packaged it up and left it on their doorstep. Once her clients had the camera, she set up a video call and guided her clients through settings, sets, lighting, and posing. And they got the images. They then returned the camera to her. And it was business as usual after that. You can see the success she had with that in the image I shared above.

From what I can see, these particular clients were incredibly grateful for her innovation in these trying times!

So there you have it. Just a few people in and around our community who are trying to spread some joy and positivity during the Covid Pandemic.

Remember that this will come to an end and things will begin to normalize eventually. It isn’t forever. Stay positive! We are doing it!

Interested in booking a consultation for sessions Roses & Scars Photography is providing?
Maybe you have more questions?