August 5, 2018. I keep coming back to this date, and taking my time writing out this first experience because it really was an experience to try wedding photography for the first time.

When I left off last time, the ceremony had just ended, the reception line had happened and I had had some private time with the couple before the reception.

It was time for the party to start. The venue had been rearranged through the efforts of the family and set up with tables, a head table, and a dance floor.

The MC – who happened to be the Bride’s brother and my soul sisters husband – announced the bridal party and then the bride and groom and they entered and headed to the head table.

There were speeches from the parents and siblings which caused some laughter in the bride and groom. Laughter I was more than happy to capture.

The catering staff were setting up the buffet dinner as the speeches were occurring, so I snuck back to get photos of the set up before it had been ravaged by the attendees.

Then it was dinner time. The head table went first, immediate family, then the MC asked trivia questions to dictate which table was able to go next. I hung next to him at the podium to try to capture the excitement as people thrust their hands in to the air to be the first to answer the questions and be the next to get their dinner.

I continued moving around the room, taking photos of the attendees as they visited and drank from the champagne bottles that had been popped, almost in sync, during the speeches. I snuck up to the head table to take more photos, and the entire bridal party told me to take a break and go get some dinner.

If you say so, Boss.

While I waited in the line to get my own dinner, I captured some photos of a little girl stacking and playing with the plastic cups on the table. It was charming.

I probably could have joined any of the tables to eat if I had wanted to, but by this point in the day I felt like I just needed to take a moment away from people. So I took my plate and ate on the stage where I had stored my equipment. I only gave myself enough time to eat then was back up and at it.

I captured detail shots of the centerpieces and of the tables as they visited, the cake table set up and pulled my flashes out for the dance portion of the evening.

Where to place the flashes was the trickiest part. The DJ was set up on the stage and his lights were facing out over the dance floor. I had seen a few suggestions from wedding photographers about the possible lighting setups but there hadn’t been a clear answer.

I wanted to light the floor so I put the lights opposite the DJ lights with reflective umbrellas to help enlarge and spread the light. I would find out later if that would work the way I wanted to.

The cake cutting was a lot of fun to capture. They had a small white three tiered cake for the cutting. I staked out my spot at the front of the table, but there were plenty of attendees with their own cameras and phones that I was aware of.

The most amusing part of the cake cutting was when the Bride cast the Groom a dangerous look as she realized he was considering smashing the cake in to her face. She gave him a, “No, you don’t,” but she still got a little bit of cake in her face.

There were chocolate and vanilla cupcakes for everyone else.

Of course, I enjoyed one myself.

Time for the First Dance and the Party! This was where I tested the lighting set-up I had chosen to use.

The lights went down so it was nearly dark save for the DJ’s lights. I flicked on my flashes and triggers.

Unfortunately, the lighting set-up didn’t work as well as I had wanted. The dance floor was quite large and my flash placement was in the far corners so the light didn’t reach the center of the floor where the Bride and Groom were making their circles. 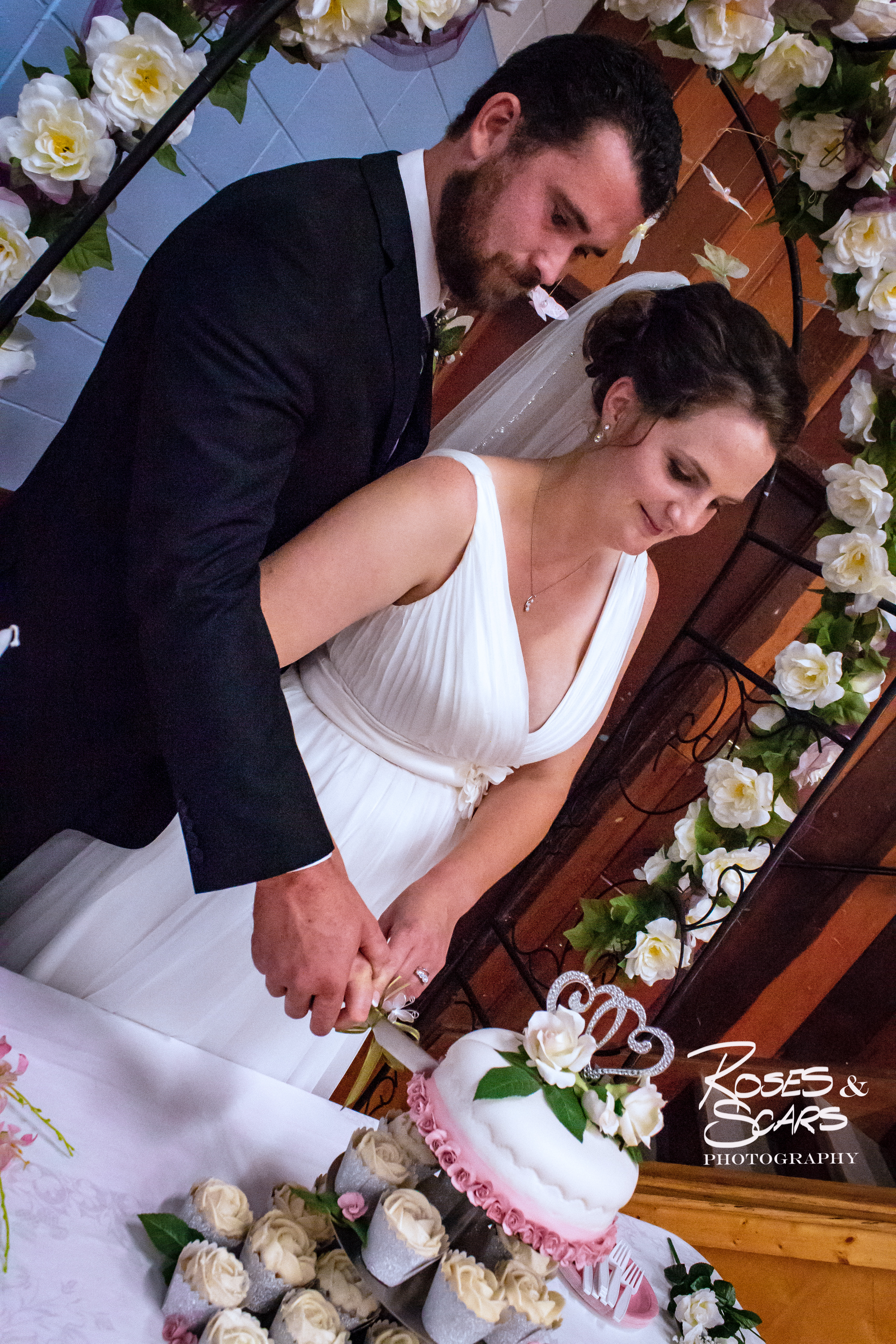 I followed them around and did my very best. It seemed like they were spinning constantly away from me so it was difficult to keep up.

Of all the moments during the day, this was the one where I found myself most disappointed in myself.

Since then, I’ve researched and searched the internet for better lighting setups that would be more successful.

I was glad that the DJ’s lights, in combination with my excellent lens helped to create some excellent photos. I did try to adjust the power of my flashes with little avail.

Capturing the rest of the dance after that was more fun and much more successful. 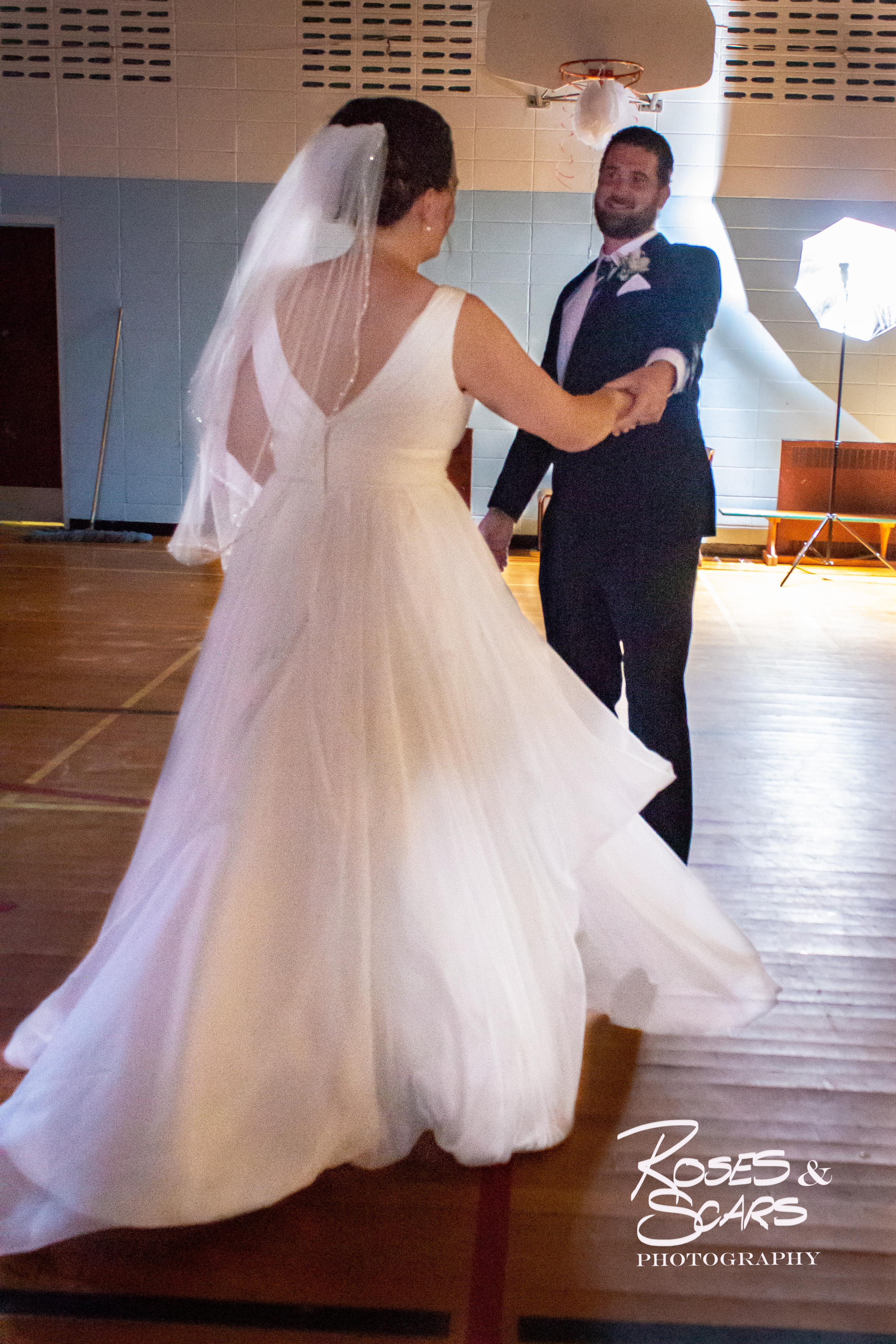 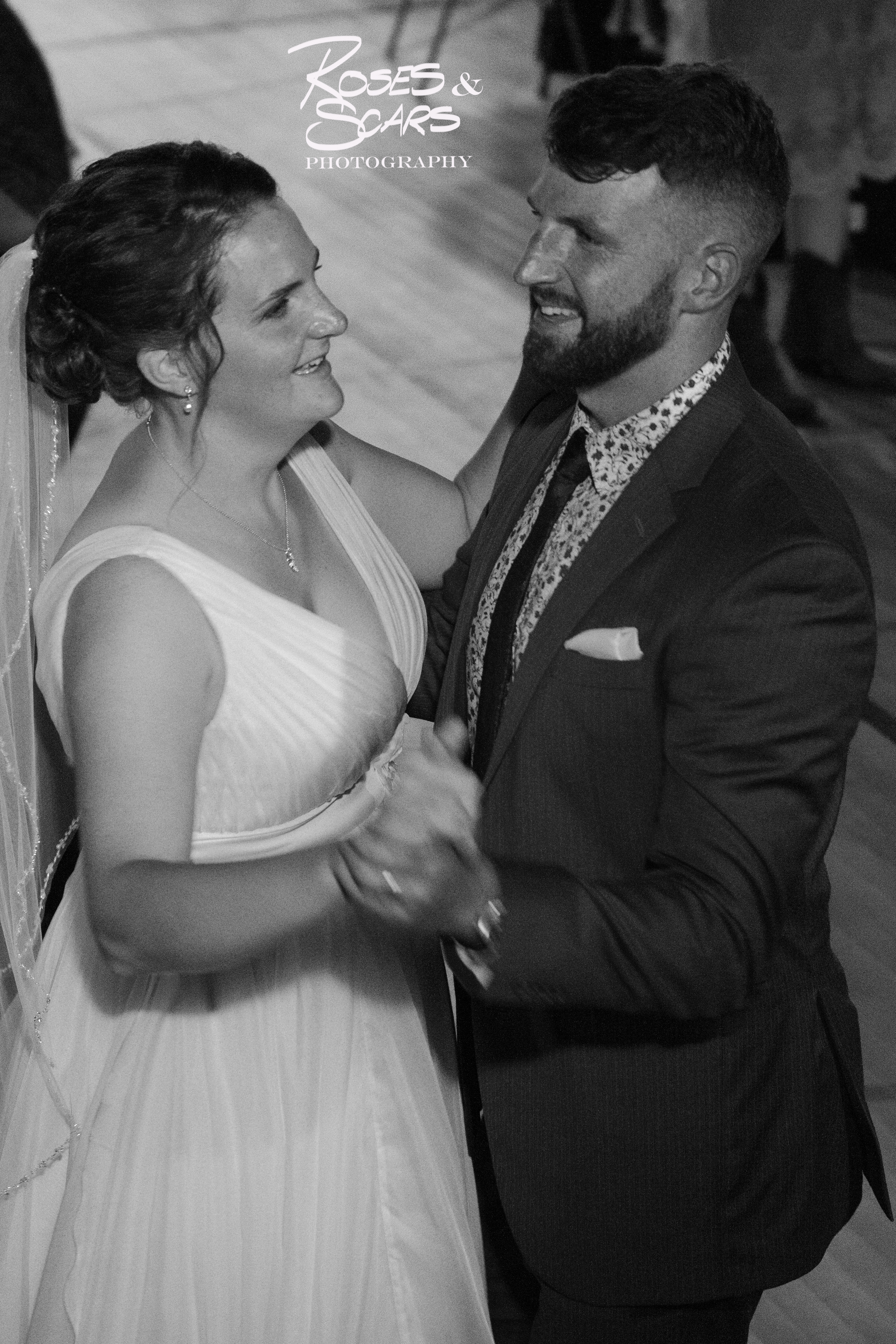 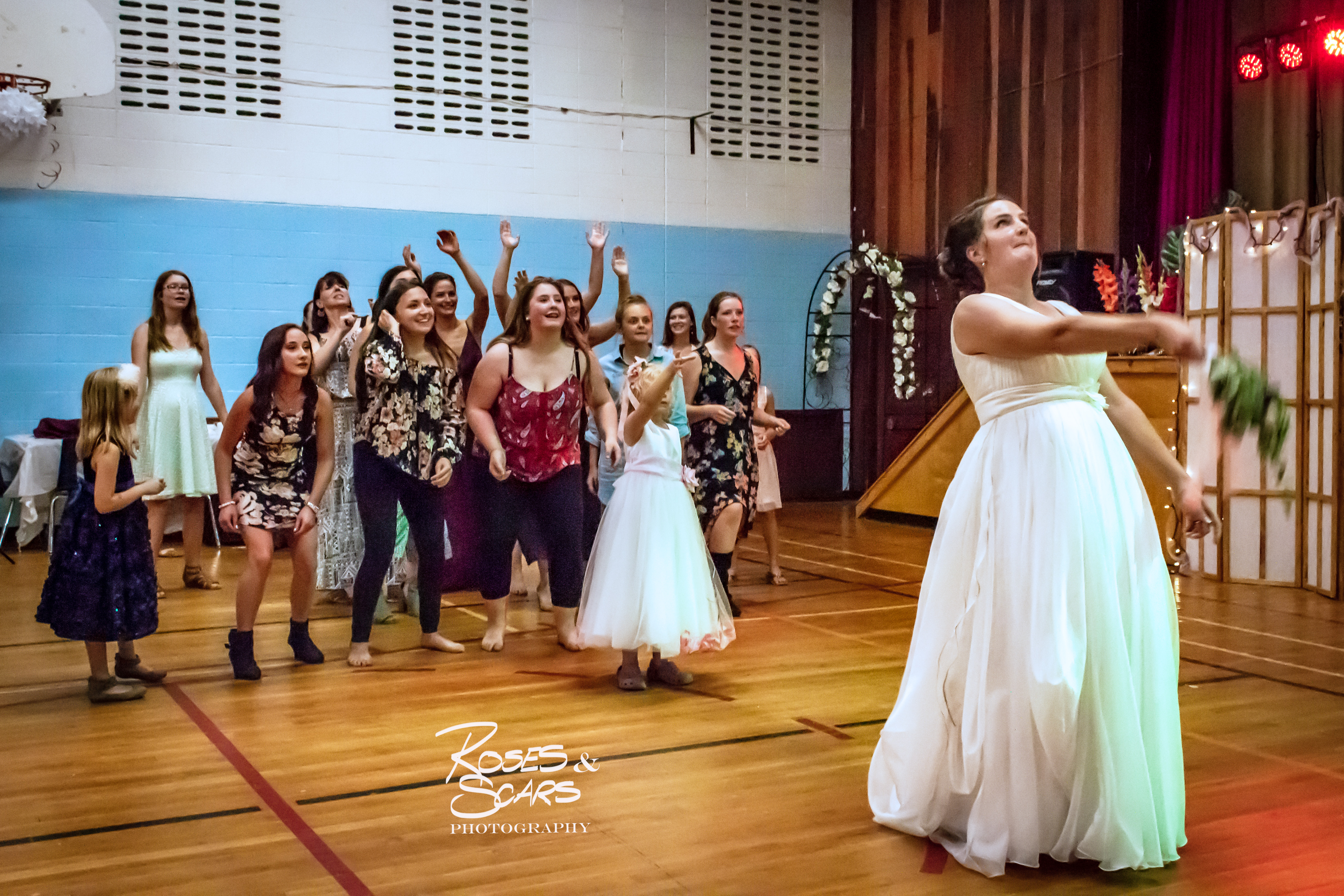 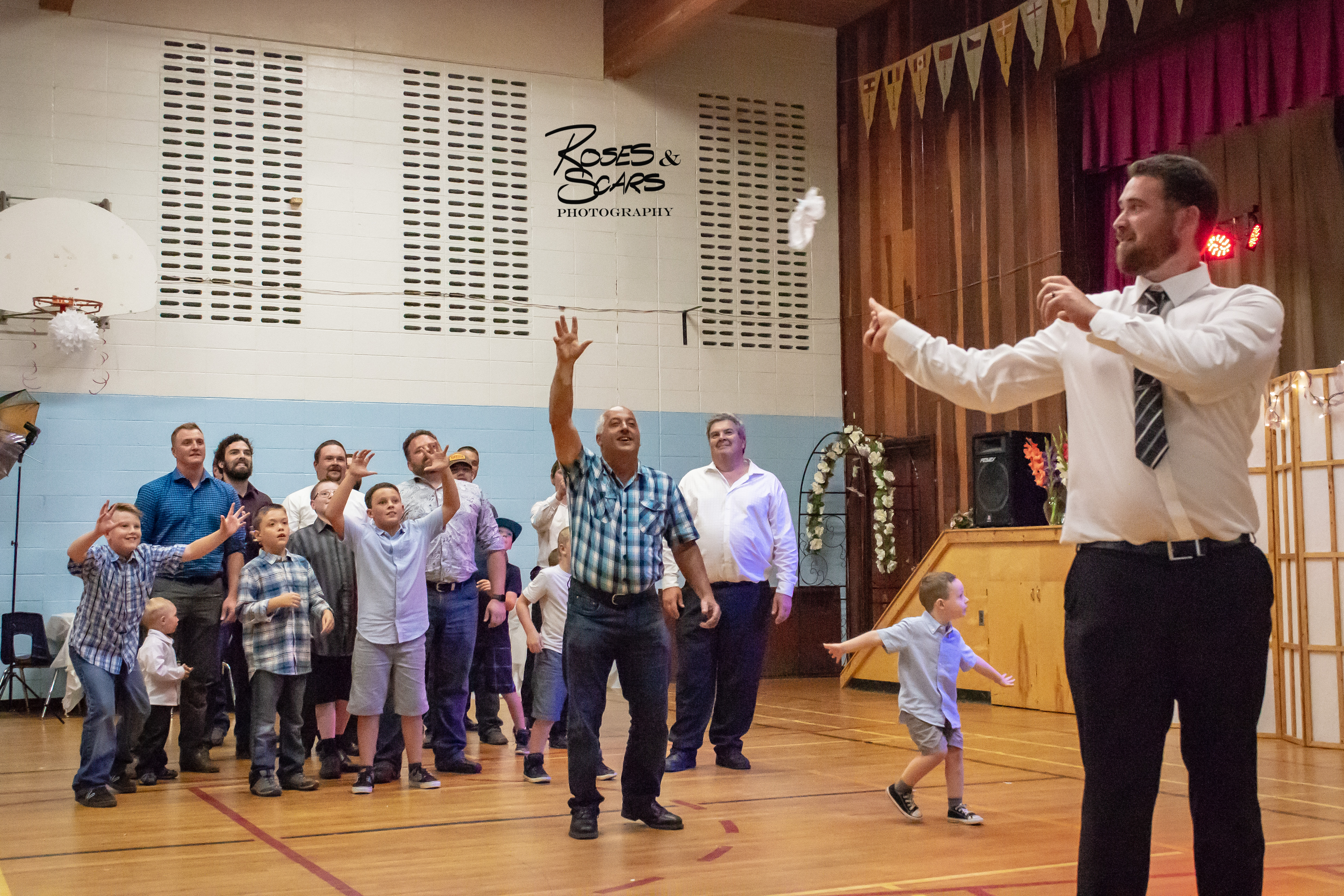 This was nearly the end of my evening. These last two events and I could pack up.

My legs hurt and my ankles were swollen. I cursed my choice of shoes and that I hadn’t given myself enough time off my feet throughout the day, even when I had it.

Just like every bouquet toss, the single ladies and all the little girls scrambled to the floor and clustered together behind the Bride. I picked my position to the front and right of the Bride in order to capture her and the group at once.

Like all bouquet tosses, it was a scramble to catch the bouquet and one lucky lady came out of it holding the bouquet high, laughing with joy.

The garter toss happened a little differently. All the young boys joined but it was almost a chore to get all the single gentleman out on the floor.

Once the garter was slung over the Grooms shoulder, only the young boys made a move for it, all the single gentleman knowing what it meant to have it. The young man who picked it up off the floor gave me the biggest smile, just the same.

Before I completely packed up and left, I pulled most of the Bridal Party in to another room of the school where we could shut the lights off.

I handed each of them a sparkler and we decided who would be doing what and how what I intended would work. I wanted to do some light painting with sparklers so the Bride and Groom could maybe use them as Thank You cards.

We decided on the word ‘Love’ with a heart and some other sparklers spread around it.

As we started the first attempt, some of the teenage boys who were there that day opened the door and screamed loud, frightening a number of us. We all laughed but we had to try a second attempt.

Thankfully, I had enough sparklers. The second attempt went much better and I was extremely pleased with the outcome.

I packed up and painfully carried my equipment out to my car.

Prior to leaving, I enjoyed a midnight lunch with my Soul Sister and her husband before heading back to the hotel for the night where I soaked in a bath while uploading photos to my hard drive.

It had been a 14 hour day in the wrong shoes. I had taken thousands of photos. I still had my work cut out for me, but I had done it. A part of me felt, “I don’t know if I ever want to do this again.”

There is a part of me that might want to consider doing weddings again one day. For now, I think I’ll stick with sports, boudoir, and graduations. 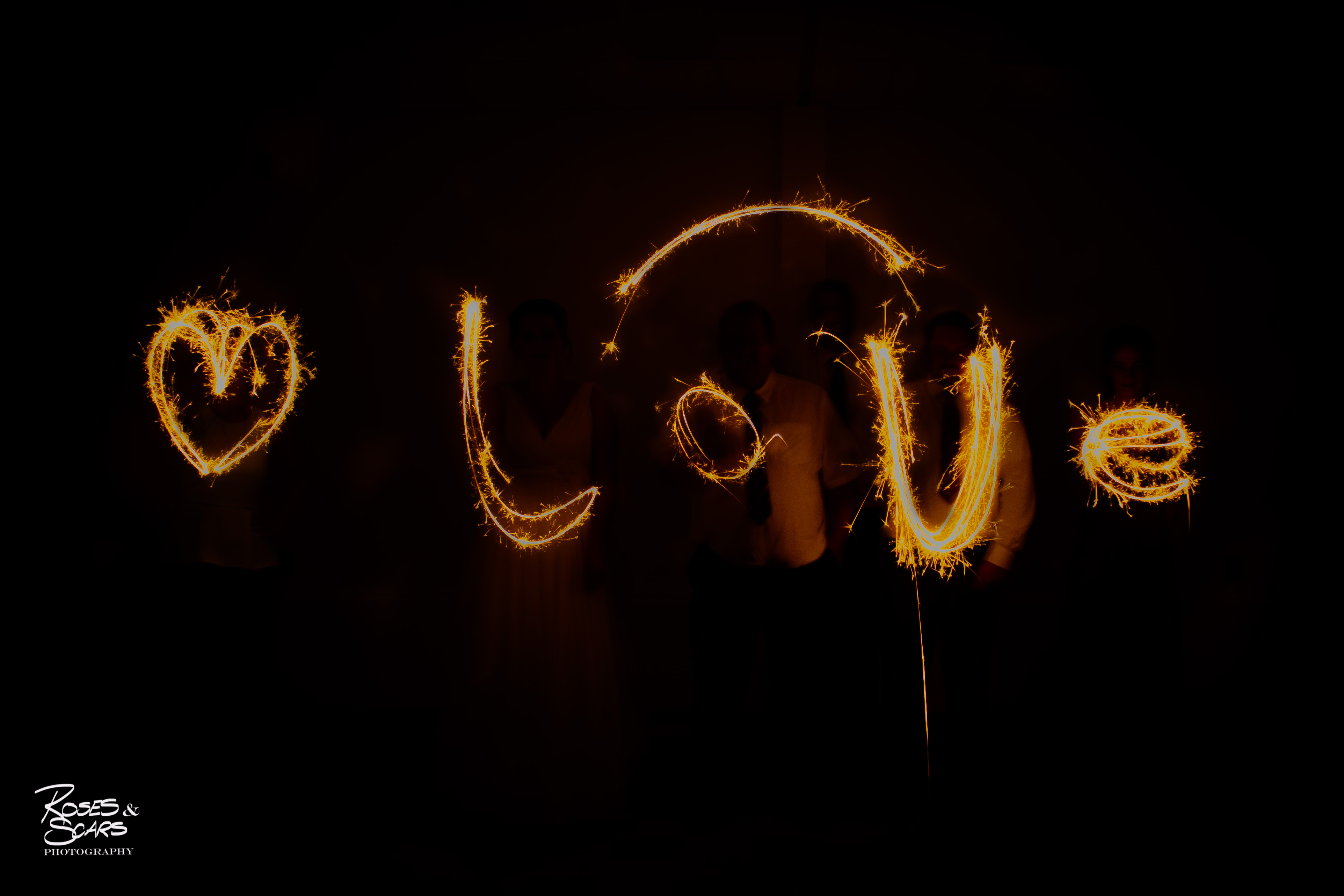 Keep Me In The Loop!